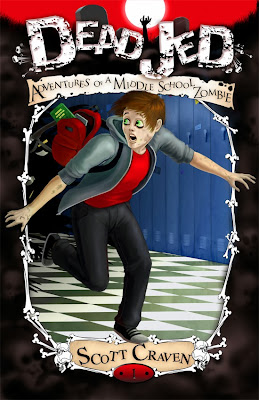 Synopsis: Dead Jed is Shaun of the Dead meets Diary of a Wimpy Kid. Jed's not your typical junior high geek. He is, to use the politically-correct term, cardiovascularly-challenged. And while his parents have attempted to shield him from the implications of being 'different' for as long as they could (Jed was 8 and at a friend's sister's birthday party when he blew his lips off onto the cake in front of everyone, finally prompting the “Big Talk” from his parents and an emergency SuperGlue repair by his dad), 7th grade at Pine Hollow Middle School as a target of Robbie the supreme school bully and his pack of moronic toadies is rapidly becoming unbearable.

From being stuffed in a filled trash can as “dead meat” and into a trophy case as the bully's “prize,” to literally having his hand pulled off in the boys' room (Jed's always losing body parts. Luckily, a good stapler and some duct tape and he's back in the action) and a cigarette put in it and try to frame him for the recent reports of smoking in the school, Jed's had enough and is ready to plan his revenge. Besides, it's awesome what you can do when you're already dead!

Brought to you by TeamNerd Reviewer Annabell Cadiz

Review: Dead Jed: The Adventures of a Middle School Zombie was humorously, entertaining read from beginning to end! Middle-grade fiction fans will have a ton of fun with this book!


Jed Rivers, like any young man freshly entering seventh grade, just wants to pass his classes, make friends and have a life defining year of awesome! But unlike normal teenage boys, Jed was born a zombie. Yep, you read correctly. Jed has no heartbeat, no need to breathe and can take apart his limbs like Mr. Potatohead. Due to Jed’s unique birth, he is more famous than he wants to be but the fame doesn’t help his popularity with his classmates since they think he’s creepy and weird and are afraid he could possibly turn them into a zombie. Jed’s life is further complicated thanks to a three-time-held-back bully named Robbie. Middle school is hard enough when you’re human but when you’re zombie, it’s downright deadly.


Right from the moment Jed opens the book, readers will love him! He is RIDIUCLOUSLY hilarious and oh-so clever!! And has a charming quality to his nerdyness and shyness. Young boys will be able to relate to Jed’s struggles (minus the whole zombie thing) about fitting in, making friends, being different and having a crush on a girl he’s too afraid to even look at let alone talk to. I love that even though he was a zombie he was a completely normal kid. He eats regular food instead of brains. He gets nervous and tongue tied around girls. He worries about showering with the boys after gym class. He has a fabulous dry sense of humor and never takes himself seriously which made him such a great read and so engaging.


The book handles some heavy subjects: bullying, need to discover one’s identity, accepting those different than yourself and learning to stand up for yourself. Every subject is dealt with ease and truth only a middle schooler could deliver. Jed learns to grow to accept his differences even though they set him apart of anyone else around him and discover a strength in himself he didn’t know he had.


Luke, Jed’s best bud, was a great friend! He’s the best friend every boy needs in his life. Luke always had Jed’s back even when the odds were totally against them and always appreciated Jed for his differences. He was cute, funny and honest. Anna, the girl Jed has a major crush on, was sweet and wise for one so young. I liked how she had to go on her own journey of self-discovery and maturity as well along with the boys.


Some of the best scenes where when Jed was able to take his body apart. I loved how he would duct tape or staple himself back together. It was especially funny how often the principal was freaked out by it ;)


Dead Jed: The Adventures of a Middle School Zombie is an easy read filled with TONS of laugh out loud moments, charming and relatable characters, and a fun-filled story about surviving middle school! It’s quirky and original. I totally recommend this to every parent who has a kid just starting or already in middle school. Definitely worth the read!


“I knew Ben and Joe’s views on life were pretty narrow, coming from the low rung on the evolutionary ladder.”


“For a dead guy, my survival instincts were real good.”


“I ran almost all the way home . . . endurance is pretty good when you’re dependent on breathing.”


“I never wear sunscreen because what’s sun cancer going to do, kill me?”


“Ever since I was little, Mom and Dead have constantly reminded me that, even though I would face challenges as a zombie, I did not have to let that define me. That I could act in a way to show people that I am Jed Rivers, capable of intelligent thought and good deeds, and that my lack of vital signs was just another part of me, like my sports and video game hobbies, or the fact that I really liked romantic comedies, especially ones with Sandra Bullock.”


“As far as I was concerned, Halloween was amateur hour.”


“Really, he talked like that. As if commas were un-American.”


“Is the lack of skills a zombie thing? I’d blame genetics, if I had any.”


“Desks were lined in six perfect rows, looking strangely out of place in the large workshop, cluttered with circular saws, table saws, band saws, hand saws, lathes, and sanders. Given the tools and the lumber stacked along the walls, together we could have built the biggest and most awkward-looking birdhouse ever, capable of bringing years of shame to Mr. Anderson, the shop teacher.”


“Maybe it’s an evolutionary thing, but the one thing most prey have going for them is speed. From the savannahs of Africa to the playgrounds of the middle school, those about to be victims have developed the kind of quickness and agility that keep their species going from generation to generation. And G-Ray was no exception. I’d seen him at lunch, the way he seemed to vanish at the mere hint of trouble.”

Proud graduate of Cal Poly, San Luis Obispo, have one son who will turn 18 in March 2013, now a features writer for The Arizona Republic.

Where to Stalk the Author!


**One SIGNED paperback copy of Dead Jed by Scott Craven (U.S. ONLY)**

a Rafflecopter giveaway
Posted by TeamNerd Reviews at 10:00 AM