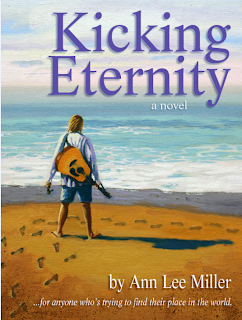 Synopsis: Stuck in sleepy New Smyrna Beach one last summer, Raine socks away her camp pay checks, worries about her druggy brother, and ignores trouble: Cal Koomer. She’s a plane ticket away from teaching orphans in Africa, and not even Cal’s surfer six-pack and the chinks she spies in his rebel armor will derail her.
The artist in Cal begs to paint Raine’s ivory skin, high cheek bones, and internal sparklers behind her eyes, but falling for her would caterwaul him into his parents’ life. No thanks. The girl was self-righteous waiting to happen. Mom served sanctimony like vegetables, three servings a day, and he had a gut full.Rec Director Drew taunts her with “Rainey” and calls her an enabler. He is so infernally there like a horsefly—till he buzzes back to his ex.
Raine’s brother tweaks. Her dream of Africa dies small deaths. Will she figure out what to fight for and what to free before it’s too late?

Cal looked up and caught her staring. Her eyes darted toward the window, her cheeks burning. When she looked back at Cal, she saw a small smile playing at the edges of his mouth and eyes. It reminded her of one she’d seen and dismissed earlier.

“Why are you quizzing me on prayer?”

“You think I have an ulterior motive?”

He sat on the table top behind him. “You were sitting there like you were afraid of your own skin. I wanted to paint your fire. Pretty much a no-brainer to get you going on a topic that lights your passion.” He shrugged and grinned at her.

Raine turned her face toward the bulletin board covered with crosses her elementary students had colored. Stupidity for having fallen for Cal’s manipulation warred against something entirely different. Cal saw something she didn’t see in herself—passion.

A board creaked nearby, and Cal squatted down in front of her. His hand cupped her face. “You moved.” He brought her head back into position. His palm stayed on her cheek a heartbeat too long, his fingers trailing down to her chin almost in a caress before he broke the contact.
She met his steady gaze. “What button are you trying to push now?”

Cal stood. “The one that turns your cheeks pink like they were a few minutes ago.”

Cal wasn’t the only one who could manipulate. “Let’s talk about obeying God.”

“Talk about whatever you want. I’m going to work on your shirt now.”

Add to Your Goodreads Shelf.

Get a chance to win a copy of Kicking Eternity! Multiple winners will be selected!


Check out our other posts in God, Boys, and Real Life Special!

Guest Post: Writing the "Christian" in Fiction
Posted by TeamNerd Reviews at 10:52 AM