This week begins the special: God, Boys, and Real Life, for author Ann Miller and her books, Avra's God and Kicking Eternity. She'll be stopping by everyday with something new and a GREAT giveaway! Today, we're giving you a glimpse into Avra's God. 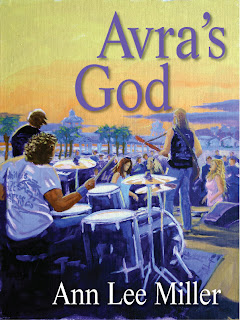 Synopsis: In the tradition of The Sisterhood of the Traveling Pants, four friends navigate college and the drama churned up by their Florida beach band to cement friendship and more.
Avra wants love, but drummer Cisco—self-medicating from his parents’ divorce with sex and intoxicants—is a poor choice. Cisco hungers for fresh-baked cookies and the scent of family he finds at Avra’s.Kallie shares her classically trained singing voice only with lead vocalist Jesse and fights to keep her heart safe. Jesse feeds on fame and hides more than insecurity beneath his guitar.The friends surf ego, betrayal, and ambition and head for wipe-out. But somehow, when they’re not looking, Avra’s God changes them all.

Pure hot springs of relief washed through his body. He twisted around on the front step to look at Avra. “I’m surprised you came out again.”

She bundled the quilt more securely around her. “Me too.” He searched her face, hungry for some clue of what was going on inside. Dark smudges shone through the translucent skin under her eyes. “You didn’t sleep.”

Her fluffy slippers and the bottom half of her jeans shuffled to the swing. “Same as last Friday night.” She settled on the swing.

She shrugged as if it didn’t matter whether she slept or not. She pulled a black spiral notebook from under the quilt and handed it to him. “It’s a journal I wrote about my feelings going through this.”

He thumbed through the pages. “You wrote a book.”

“I don’t react quickly to stuff.” She tucked a leg under her on the swing. “I have to go home, think about it, write it out. I have four other journals—different subjects, different colors.”
Realization hit him. “That’s why you’re so calm all the time. You get your emotions out in private.”

“Not so private since I’m sharing them with you.”

He bent over the notebook. Avra’s words fired at him like buckshot. He felt her eyes on him and glanced up. “You weren’t a fool for trusting me. You expected the best from me. I don’t know if anyone else has ever done that. You were gutsy to give a loser like me a chance.”

A dry laugh burst out of her. “Let’s be honest here. You were one of the most popular, hottest guys on campus. You spoke to me and my entire body and brain melted into a puddle on the floor.”

“Maybe we’ll talk about it another Saturday.”

“Sign me up for that Saturday.” He returned to the journal, tossing her pain like lead fishing sinkers into the pack on his back. “This was not your fault. This was all about my taking something God wants me to go on wanting. This is about my sin.” He read another page. “No, you should not have given me sex.”

Avra shifted and the swing creaked. “You never pressured me, never asked me outright. I appreciate that. In a way, you protected me.”

“No, I just whined and complained, trying to wear you down. But you’re right. I couldn’t ask you. It was like ‘the princess loves me.’ I couldn’t bring you down to my level."

He read on, page after page, his lips moving with the words. I trusted Cisco completely and he betrayed me—shattered me in a billion pieces. He shut the notebook and stared at the black cover. His eyes felt wet.

He tossed the notebook onto the swing beside Avra and stood. His hands dug into his pockets as he searched her face to see if there was anything else she needed to tell him. He reached for her hands. “Avra, I never want to cause you to write another page in that book.” Her fingers squeezed his, and they peered into each other’s eyes until the revving of the garbage truck disturbed them.

“Are you going to ask me out again?”
“Do you want me to?” She stared at the clouds, unseeing. She didn’t hear his breathing.
“Not yet.”
Cisco let his breath out. “So, I should ask in five minutes? Half an hour? Next week? Next month? If it’s anything less than not in this lifetime, I’ll wait. I’m not going anywhere. I’m patient. Now.” ~Cisco and Avra

“You keep them. If there’s a happily ever after, you can glue them into your scrapbook.”
“Since when do you believe in happily ever after?” “Since I see how he looks at you when you’re not watching.” ~Kallie and Avra

“Six months ago you didn’t like the way I dressed, that I tried to read your mind. I was too whacked for you.” She brushed angry tears away with her palms. “It half killed me to cut you out of my heart, but I did it.” She glanced at his hand around her wrist. “You can let go of me now. I won’t leave until you hear everything that’s on my mind.”

Jesse loosened his fingers. “Is that a threat or a promise?” He grinned wryly and scooted closer to her. ~Jesse and Kallie

Posted by TeamNerd Reviews at 3:52 PM